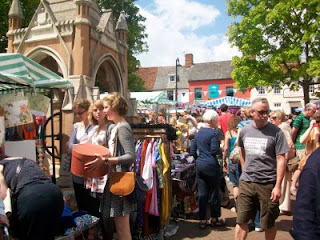 Here is a picture of the Vintage and Contemporary Fair in Woodbridge we went to last week. I took loads of pics of how busy it was and people buying and enjoying themselves but because it was so busy I couldn't get shots of the stalls. But it was a great day, the area the stalls were in was a bit too small really. There was so much squeezing between people I think I probably missed quite a bit of good stuff because you just couldn't get in to see the stalls!

As you can see from the photos it was a really lovely day, warm and sunny and looks like the stall holders had a very profitable day too! I managed to get myself an orange handbag which i'll take a picture of soon so you can see it. I would've got more but not only could i not get to the stalls but I was rather poor too! Probably for the best or I would've had so much stuff and I don't have much room to spare as it is! 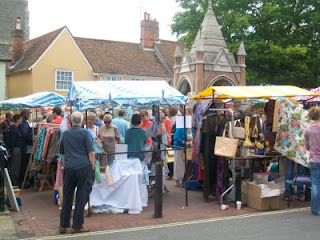 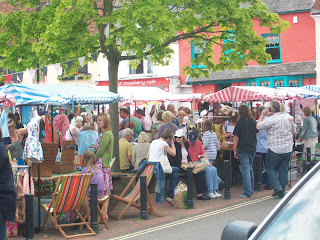 Well i'm off this morning to ignore what I just said about not having much spare room and going for a trawl round the charity shops to see what I can find before Wimbledom coverage starts at 12 noon!!
Posted by Jess at 08:34

Looks like a great day. Hope you don't mind but I've just tagged you. Do feel free to ignore!

I would like to exchange links with your site cuppateaandcake.blogspot.com
Is this possible?